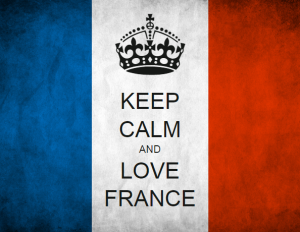 After 4 years of living in France, a status check imposes.

Living conditions: except changing the environment, my life didn’t change too much: still 30 mins to go to work every day; still a 2 rooms apartment (or a studio when I was on my own), still weird neighbors, with the only difference that here I made friends! The only real difference is the housing prices that are waaaay too high, but that’s what you have to pay in a renowned city….

Job conditions: aahhhh the French job market! Being a foreigner was not really an advantage at first; Toulouse is a small city and people are not very open minded. But Paris is fine and I have great colleagues! J From a salary point of view, the usual: under paid in Romania, under paid in France – but maybe it’s because of me. Otherwise, the way of working is quite different and I had (and still have!) to adapt. And by the way, the myth that says French people work less – that’s not true! The only ones that work 35h/week are the ETAM (I’m not sure what it means exactly, but in general it is for people that don’t have a BA and a Master degree). The rest, “les cadres”, can work for hours and hours, because the law is not very clear on that. The good thing though is that you can have around 35 days off per year!

Friendships and social life: I think I hit the jackpot! It took quite some time to make friends, with ups and downs but the ones that stayed are amazing. Still, I go out a lot less than in Bucharest because here everything is a lot more expensive. Given the fact that dancing was the only sport I did, it’s a bit complicated now, but I do try to run every now and then and do a round of T25 in front of my PC.

Eating habits: I pay more attention to what I eat, especially in Paris, because the food is not great. I eat organic, but unfortunately sometimes fruits come from far away. I think that’s the biggest problem in developed countries – they have less natural soil, so less natural goods come out of the ground. Plus, France is one of the most important pesticide users in the world!

Last but not least, some advantages and some disadvantages:

Good: you can live a very quiet life, even in Paris; you can go to any cultural event you could have imagined (if you are willing to pay the price and to stay in line!); you can be in any kind of NGO you like (for gays, for kids, for dogs, dancing or just about anything you can imagine), you can vote where a part of Paris’s budget goes, you can get a bike just about everywhere…

Bad: you pay insurance for just about anything, and people really take advantage of that; as mentioned before, bad food and high prices everywhere; people talking behind your back; plus I lost my English vocabulary in this country!! 🙂

What’s your own experience with France, or with any other country?